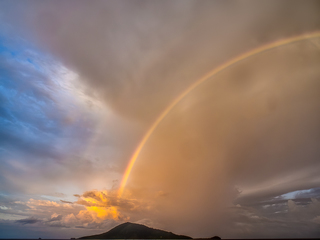 THE RAIN is raining all around,

It falls on field and tree,

It rains on the umbrellas here,

And on the ships at sea.

Why do certain poems like Rain, by Bob Stevenson, stick in our brains and suddenly pop up when...well, when it's raining cats and dogs?? I think it's the rhythm.

Try taking away the words and just say da-da da-da da-da da-da. It sounds a little bit like rain, perhaps; at least it sounds like the relentless drips inside the downspout outside my bedroom window when it's raining at 3 a.m.

But lots of poems have the same meter: It's iambic tetrameter, here alternating with lines of extended pentameter, which create a rhythm that seems to resonate with native English speakers.

I wandered, lonely as a cloud

Mine eyes have seen the glory of

Because I could not stop for Death

So it takes more than a steady beat: it takes words, working intimately with the rhythm, to give the poem meaning and lodge it in your brain.

Start with the first line: the rain is raining all around. The rhythm is even and ceaseless, an all-encompassing sense of the rain coming down everywhere out of endlessly gray skies.

Then you notice some specifics: it falls on field and tree. It's raining on things, on the branches and tiny new leaves of the trees; on the grass in the fields, and on whatever is in the fields – sheep, cows, the vixen crossing the meadow.

And then it falls on the umbrellas here, and the mind of the rain-watcher pictures another scene: Main Street in Chatham, crowded with dripping tourists bumping into each other;

And then the ceaseless flow of the rhythm carries the imagination of the reader beyond the mundane, beyond solid earth, to see the rain falling out over the ocean, and on the ships at sea. The sea is dark gunmetal grey, and the ships look so tiny as they chug bravely toward the horizon, which they will never reach.

There is such pleasure in hearing and speaking poems – and stories and songs, too – that are written in steady, familiar meters.

Praise god from whom all blessings flow

And DID those FEET in Ancient time

Today I had a rotten day

But, you say, I thought it took the combination of rhythm and words to make a memorable poem.

Well, that's the fun of reading and writing. You can write things any way you want; and then the reader can read them, and analyze them, any way she wants; and everyone is always right.

But the really neat thing is that you don't have to analyze them; as you listen the rhythm of the words just sinks into the little grey cells of your brain, without you even having to think. And at some sudden future event, the poem pops up to the surface: at a diner, you may tell the waitress you do not like green eggs and ham.

When you're walking the dog in Kenrick Woods, you think to yourself, Whose woods these are I think I know.

On a rainy day in April you may see that the rain is raining all around. And it makes you happy, because the rhythm feels good, and you know that, even though the rhythm's a little off, April showers bring May flowers.

And when you live on the Cape, you know exactly what May flowers bring. Pilgrims.