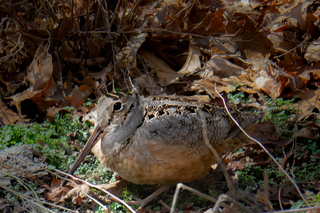 Yesterday I was standing there ironing when I glanced out the window and saw a mourning dove on the dirt path behind the oakleaf hydrangeas. It was awfully fat. And it was weaving back and forth, as if it had a stomach ache, or was saying to itself Oh dear oh dear, whatever shall I do?

I looked more closely and realized that this was no common mourning dove; it was an American Woodcock! I threw down the iron and dropped to my knees, then crawled over to the window to peer cautiously out. The woodcock was moving at about the speed of a sloth, its left eye – the one I could see – apparently looking directly at me. It rocked as it walked, bobbing back and forth as it inched along, hoping to hear underground movements. It was moving so slowly, and stopping so often to make sure nothing was coming up behind it, that I felt free to crawl away from the window, scramble to my feet, and rush away to get my camera, even taking time to put the zoom lens on. I crawled back to watch him rock his way down the path, then into the mayapple plot and across the clamshell walkway, where he hopped over a log into the dead leaves under the Carolina silverbell.

I love woodcocks, with their silly long noses and their big sideways eyes. The first one I ever saw was when I lived in Maine, one morning when I ran into one walking down Seal Cove Road. You can parse that sentence either way – it was indeed walking down the road, as was I. I nodded and he nodded, and we continued on our ways.

Woodcocks are famous for their mating ritual. Audubon.org describes it as a remarkable "sky dance, a high, twisting flight, with chippering, twittering, bubbling sounds."

Allaboutbirds.org, the website of the Cornell Lab of Ornithology, says the displays are magical. "The male...gives buzzy peent calls from a display area on the ground, then flies upward in a wide spiral. As he gets higher, his wings start to twitter. At a height of 2–300 feet the twittering becomes intermittent, and the bird...zigzags down, chirping as he goes, then lands silently (near a female, if she is present). Once on the ground, he resumes peenting and the display starts over again."

The description always puts me in mind of that gold-hatted, high-bouncing lover in the Gatsby epigraph. I'm not sure I would be particularly attracted to some guy bouncing around in a gold hat, but a few years ago I did pay twenty bucks to stumble through the gloaming in Wellfleet with a dozen other people in hopes of seeing a woodcock dance. We saw nothing, and heard no twittering or bubbling, only a few faint peents.

But I am quite satisfied with just watching my woodcock visitor ponk around in the yard, poking into the dirt for whatever unlucky creature is huddling there. The night after his visit the temperature dropped into the single digits, and I certainly hope that the clutter of dead leaves, weeds, and a winter's accumulation of sticks and twigs was providing a cozy enough roosting spot for him.

I never did get back to my ironing, but life has its disappointments.