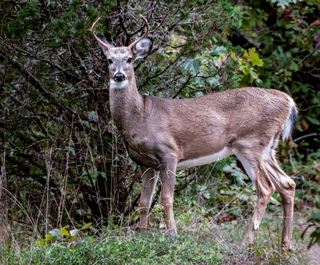 Now and then I walk with Pippin and Thurber, the Rescue Squad, in the woods on a piece of public land not far from my home. There are gravel roads running through it that are kept in good enough condition for trucks to use, and there are half a dozen cinder block storage buildings owned by the town. As with any piece of land on Cape Cod, it's not exactly wilderness; but not many people walk around there, which is why I do.

We don't see much in the way of wildlife, either. There's a nice understory of lowbush blueberry, or huckleberry – I don't know the difference – so I imagine that in season the forest floor is skittery with birds and rodents moving through a wonderland of fruit. But for the most part the only other creatures we've seen, besides spiders and ticks, are human beings, dogs, and the occasional horse, a sighting which causes great excitement in the Rescue Squad and great resistance training for my upper arms as I cling to their leashes.

I went there on one cold and quiet day last fall, a fine day for following my dogs and my thoughts through the pitch pines. Our surroundings were all in shades of gray and black, the sky gray, the tree trunks black, even the pine needles gray in the November light. It was that dark cold season that's the perfect time to wallow in sadness and depression and grief.

As I've said, there are some little cinder block buildings here and there, where the town stores trucks and sand and rusty things, and when we came around the corner of a sharp-edged, institutional green garage, we ran smack into a dead deer. It was a six point buck, hanging from a hook outside the open garage door, its fur a rich brown and black, its nose and eyes seeming still to glisten. But the belly had been slit open and gutted, and bright blood stained the white fur and half-filled a pail beneath it.

Strangely enough, Pippin and Thurber weren't very interested. Maybe the smell had dissipated when the guts were removed; maybe they were on the alert only for things that move or bark. They snarfled around in the gravel and the sparse grass as I stood looking at the dead deer.

I didn't feel sad, as I might have expected. Mostly I wondered at how full of life the deer seemed, the shape, the texture, the colors of a living breathing creature, even with the last of its life's blood dripping into a bucket. At least it hadn't been mangled uselessly by a car and left to die at the edge of a road. It had lived for a couple of years at least, and now, part of the whole big system, it would provide a few good meals for some fellow creatures.

We went on walking, the dogs oblivious, and my mind too moving on to other thoughts and other visions.

I say I didn't feel sad. But months later, as spring comes on, I can still see that deer in my mind's eye, hanging alone in the quiet woods.