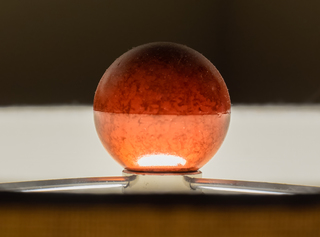 For my most recent birthday someone gave me an EcoSphere. It's a little sealed glass orb, and inside it are water, a sea fan, algae, some tiny rocks, and four weensy shrimps. It is apparently a complete ecosystem: the right amount of light combines with carbon dioxide in the water and produces oxygen, which the shrimps breathe as they nibble on the algae and bacteria; the bacteria breaks down the shrimp poop, which the algae dine upon, and the shrimp and bacteria produce carbon dioxide, which the algae use to produce oxygen for the shrimp to breathe. And they all live copacetically ever after, for an average of 2 or 3 years.

It was a very thoughtful gift; after all, it includes the term "eco." It is pretty, like a paperweight. Rather, it's more like a SnowGlobe: shake it and the little rocks and the algae and the sea fan roil around inside, coming down in a new configuration, and the shrimps scuttle about among their rearranged furniture until the water of their little world is still.

But you're not supposed to shake it, or drop it, or treat it roughly. The literature that came with my EcoSphere says that it represents our planet, and the shrimp represent us, human beings. We are supposed to learn, from the EcoSphere, how important it is to maintain a delicate balance with our environment.

I hate it. Well, I don't hate it, but I get a most uncomfortable feeling from it. If the EcoSphere gets too much sunlight the water inside will boil, and everything will die. If it sits in the dark for three days, everything in it will die of starvation. And there is no escape from the EcoSphere. The shrimps are in there forever. They have no prospect of scuttling around in sand, or mud, or salt water, or seaweeds. The only exotic food they get to eat is one another's exoskeletons.

The only possibility of escape is through the offices of some external force, like a giant human hand, which would dash the orb to bits, in the course of which event the sea fan and the little rocks and the shrimps would be spattered all over the living room; and the shrimps would be lucky to survive the crash, and lucky to be found alive in the sofa cushions or under the coffee table; and it would take an extreme bit of luck if a glass baking dish full of water and algae were nearby for them to be plunged into. If it wasn't luck, but perhaps part of a Plan B, it would take superhuman planning to transfer the shrimps unharmed from the EcoSphere to the baking dish; and once there, they'd be subject to evaporation, suffocation by pie crust, ingurgitation by thirsty dogs, or obliteration by sponge.

So even though it's pretty, I find it hard to look at my EcoSphere with anything but a sort of despair. It's such a tiny world, inside that orb. And as with most worlds, there isn't really an alternative.