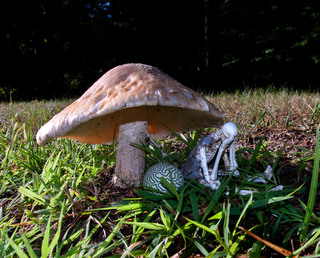 Big changes in your life make...big changes. When My Companion died recently, we weren't taken by surprise; he was old, he had a heart condition and a lung condition, and in the last couple of years he'd gotten pretty frail. But we were taken by surprise. It was too soon, too fast, and too definitive.

Afterwards I was able to fill hours and hours with paperwork and computer work and writing checks for remarkable amounts of money for things like cremation, multiple death certificates, and attorneys' fees. But changes had come, no matter how long I tried to stay hunched over my desk.

One of the changes was Grocery Shopping. For the last quarter of a century, ever since I started having panic attacks in supermarkets, My Companion did the grocery shopping. He didn't always buy the right kind of ice cream, and he refused to buy organic food; but since he did the shopping, I never complained. Well, I might have complained once or twice, but mostly I ate that horrible butter pecan ice cream without too much grumbling.

And now I face the endless freezers of ice cream, sugar-free ice cream, frozen yogurt, and gelato alone. I don't panic any more, but I always come away a bit shell-shocked by the plethora of choices and the superabundance of inedible edibles on grocery store shelves.

Then there's the Rescue Squad. Pippin and Thurber are way cute, but they're not overly fond of each other. When they're out in public and see a dog they don't like but can't get to, they turn on each other and do their best to rip one another's throats out. My Companion used to walk Thurber and I walked Pippin six feet away, and for years we made our way around the neighborhood fairly copacetically. But with a wingspan of about 5feet 8inches, it's hard for me to maintain a six-foot safety zone between dogs by myself. So our formerly peaceful, contemplative morning walks have turned into a sneaky patrol through potential enemy territory, where at the sight of a distant dog I must whip us around and go in another direction, or step into someone's yard and stand us all behind a tree, hoping the boys won't notice the hated intruder.

Combine this situation with the need to drop Cheerios into Pippin's mouth to distract him from leaping at every passing car and to fill, tie, and carry as many as three bags of feces, and you can understand that walks have lost a touch of their luster.

Without My Companion everything has changed. Locking the doors at night, putting air in the tires, loading the dishwasher, replacing smoke alarm batteries, answering the phone, dropping off returns at Staples, thinking up Christmas presents for the teen-aged grandson, making the weekly dump run. It's not exactly lonely, but it's strange.

And it puts a big burden on me. With no Companion to hover over and boss around, I have few obligations other than the Rescue Squad. It's time for me to go out and do something important, like join the Peace Corps, or put my personal finger in some dike before the waters rise too far over the Cape, or sponsor world peace.

I'm going to go home and ponder my future. On the way I think I'll pick up
another gallon of butter brickle, or cookie dough, or some coffee chocolate chip.