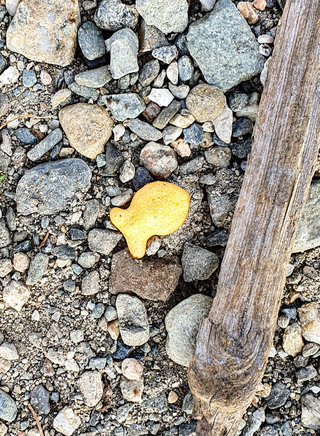 Gift From the Sea

Thurber found a conch on the beach this morning. It was half-buried in the sand, just at the edge of the water. He sniffed it suspiciously, then moved on, but I reached down and picked it up. Its foot was halfway out, but it pulled it in as I turned it over; a tiny mollusk was attached to the shell, but otherwise it was smooth and unblemished.

There was a time when I would have taken it home, boiled it to clean out its shell, and put the clean empty shell on a shelf, in order to...remember something. Something having to do with the sky reflecting in the easy movement of the water in the bay, the egret that flew unbending toward the marsh, Thurber's cute suspicion. It would have been proof that I had been living on Cape Cod, a place with the reputation of being some kind of paradise, and that I had been close enough to nature to bring some of it home with me.

Somewhere along the line, though, I stopped seeing the shells and paid more attention to the creatures inside. You can't really bring home a shell with a living conch in it, unless you want to put it in a tank and tend it until it dies. Or you might want to fritter it, or make a stew, the likes of which I have eaten in Florida, and which I suppose they make here in New England, too, though I don't remember seeing it on a menu.

But since I don't much like taking care of aquaria and their inhabitants, and since my protein needs are pretty well met with dead chickens and highly-processed soybeans, and since even the cleanest of seashells dulls and gets chipped along the rim and doesn't really remind me of anything except how dusty my house is, I opted to leave the conch there at the edge of the bay.

But I had pulled it out of the soft sand where it had been lying camouflaged, and now it was exposed, at the mercy of any other dog and woman who happened by, who might be in a different phase of the beachcombing life than we are. So carefully I tossed it a little farther out in the water. But it was still highly visible, so I waded in, picked it up, carried it a few more feet, and tossed it again. It landed foot-side up. Would it be able to turn itself over, to ease its way back down into the sand? Or would it lie helplessly like a turtle on its back, at the mercy of the next predator that came along?

Once more I waded in, reached down into the water, and set it on its foot. I sort of expected it to scuttle away, like a crab, but I guess conchs don't scuttle. I wished it good luck, waded back onto the beach, collected the dogs, and headed toward home.

As sometimes happens, as I walked I had a sudden vision of us as someone coming along the path might see us: a couple of grinning and panting dogs, wet and sandy up to their stomachs, pulling a lady of a certain age wearing her dead husband's old shirt, floppy pants wet to the knee, and soggy socks with her water sandals. She has a safari hat on her head, and carries some kind of charm, a little bag of fecal matter, on a belt around her waist, and is walking somewhat oddly, because she has painful arthritis of the neck, which causes her to carry herself with care.

Next, I imagine us walking down Namequoit Road when an unmarked car pulls up beside us, and a couple of men – maybe a woman, but probably men – in camouflage clothes jump out, pull my hat down over my face, stuff me into the back seat, and drive me away. I imagine how much my neck would hurt, subjected to scrunching and jolting.

I imagine the alarm and ferocity of the dogs. Who will calm them? Who will take them home?